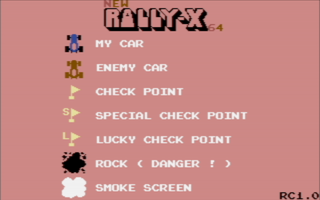 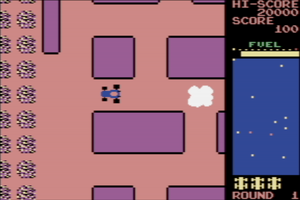 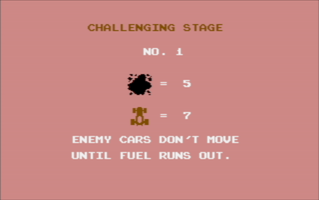 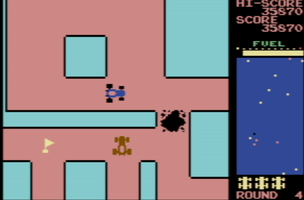 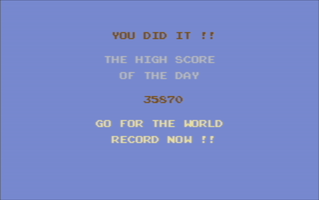 After playing the game on real hardware (both PAL and NTSC) I have adjusted the colors with the goal of both having good contrast and being somewhat close to the arcade version.

Made some changes to the sprite multiplexing to have less flickering in certain situations with many sprites on screen at the same time.

Added Load/Save high score to disk for the d64 version.

This will be release candidate 1, if there are not major bugs this will be the same as the actual release.

This is just _so_ cool - a brand new arcade port of Rally-X for the Commodore 64 in 2022! A question, if you don't mind! Would you please consider a native build for the Commodore 128, too? It doesn't have to have any extra features at all. In fact, just being able to start New Rally-X from the Commodore 128's BASIC prompt would be a feat all in itself, and it would mean a ton to the C128 community seeing that the current games' library is so small. Having an arcade port run natively on the C128 would be such a huge boon for the platform! I'm certainly not asking for any promises, but I think it would be really neat if you could at least consider a C128 port. Thank you!

I do  have a C128, actually I do most of my C64 stuff on the C128 as the keyboard is much better, but I'm not sure it would make much difference to release an identical C128 version of the game. But I'll have a look how much effort required.

Awesome, and thanks for even thinking of it! ❤️ Even if the game will be identical to the C64 version, a native C128 release would still mean a ton. It would recognize and acknowledge the C128, both as an 8-bit platform of its own as well as its community. In fact, I'll go as far as saying a native version of New Rally-X64 would be a milestone for C128 action games 👍.

Again, thank you for listening and best of luck if you decide to build a C128 version - really crossing my fingers for it!

is it meant to work on Vice as well? I can't get it to load. It seems to be loading ok, but then the screen goes black and sits there.

Same here. It doesn't work in my NTSC C64 either (I'm trying to load it from a SD2IEC)

Did you run the d64 or the prg version?

My bad, I messed up the RC1 with some weird bank switching bug, new RC1.1 ready, hopefully it works on everything, I've tested VICE, CCS, Real NTSC, Real PAL.

Make sure you enable virtual devices in VICE.

Alternatively you can just run the prg version without disk save.